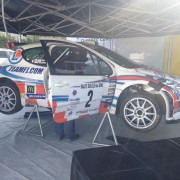 Roche ended up 22 seconds behind race winner Eric Brunson, despite winning four of the Coeur de France’s 10 special stages in preparation of the next race of the Division I French Rally Championship, the Sept 3-5 Rallye de Mont-Blanc Morzine.

“Congratulations to Eric and Cédric! On our side, we are quite satisfied with our performance. It was a good training for next week’s Mont-Blanc rally,” said Roche.

Michel Morin fought hard for the third place until the end at the wheel of the Team FJ Ford Fiesta R5, but had to settle for fourth by just 11 seconds, winning the R group and scoring important points for the French Rally Cup.

Team FJ will receive a first Skoda Fabia R5 in January 2016, while a second one will follow soon. They will be available for renting programs in the French Rally Championship and the French Rally Cup, but also for European ERC and WRC events.

Team FJ, celebrating 25 years of activity in 2016, is a top-level team on the French scene, with more than 300 wins and various podiums in the French Championship and Cup. The team, already fielding a Mini WRC, two Subaru WRC, two 207 S2000 and one DS3-R2 will keep developing its rally activities thanks to the Skoda R5, which will be the first to land in France.

“It’s a logic choice,” declared Jean Galpin (Team FJ co-founder and Rally manager). “Today the R5 category is developing quickly and it’s gaining ground at every level, both national and International. The agreement was reached a few weeks ago, when Jerome and I went to Mladá Boleslav to meet the Skoda Motorsport representatives and present them our sporting projects for the future.”

“Since 1991, Team FJ developed its skills and activities in motorsports to offer the best service to our drivers and partners, both on the technical and logistical side and in marketing and communications,” concluded Jerome Galpin (Président CEO de Team FJ). “Rallies are among our core priorities, with the goal to win the French Championship and the French Cup, but also to expand on the international scene. The Skoda is the best weapon to reach those goals and allow all the drivers and teams that trust us to battle for the win”